Picking back up today from where we left off.

On Brian's second attempt to hang out with me, I got a random phone call while out shopping with my friend Meg at Alamance Crossing one afternoon.

"Who was that?" she asked.
"It was just my friend, Stephanie, from Mill Creek," I told her. "She and her husband went to Elon a few years ago. She's at West End bar now and invited me to come hang with her and her friend Strawberry.  I think this guy has a crush on me."
"His name is Strawberry?"
"Yeah, I know. Silly. I don't wanna go. Let's just keep shopping."

Part of me was hoping Strawberry would give it up at this point, but another part of me was flattered. If he stopped liking me, surely I would be a little disappointed. I needed to keep him around a little bit longer until I made up my mind on what to do. I needed to reel him in, but then possibly throw him back in the water if I panicked too much.  (I am Woman, Hear me Overthink.)

I shared a couple drinks with Leah and her friends in our kitchen, and then they headed out the door to go to Lighthouse.

"Come with us," they begged.
"Eh, what the heck," I shrugged, as I grabbed my stuff and headed out the door behind them.

About halfway across campus, I realized I had made a mistake. Leah and her friends walked ahead of me, talking and laughing. The closer we got to Lighthouse, the clearer the image in my head:

I was about to be standing by myself - alone in the corner - at the crowded campus bar.

(Elon was like a big high school, so this was a true emergency.)

"Hello?" he answered.
"Hey Strawberry. It's Kelly," I said casually, as I continued the trek to the bar. "Where are you?" I asked him, as if this whole phone call was completely normal.
"Uh, I'm at Jason and Steph's house. Guitar Hero III was just released today, so we're playing that. Uh, why? Where are you?"
"Headed to Lighthouse with some friends. Everyone's there tonight, and since it's Homecoming weekend I just figured you might be out."
(A pause. I waited. What the heck was I doing?)
"Oh, okay. We can be there in about twenty minutes."

I probably downed three drinks in that twenty minute span. I needed liquid courage. I remember seeing the white Tahoe pull up to the bar, and Strawberry jumping out to meet me.

A David Gray song was playing in the background.

He came over confidently, and it was a moment that can only be summed up like this:

It's something that can only be summed up like this:

So there we all were. My friends. Strawberry's friends. Hanging out at Lighthouse.

At some point during the evening, Brian was chatting with Leah over near the pool table.

"So, do you like Kelly?" I overheard her asking.
"Yeah," he responded.
"Well, you need to get in line. There's a really long wait list. Every guy in here is crushing on her."

That was the nicest lie anyone has ever told for me.

Later that night, we went a couple more places. Not much happened, but as Strawberry got up to leave, I asked him a question.

"Oh, by the way, are you on Facebook?"
"No" he responded, a little confused. "I have a MySpace." (Brian was 25 years old. Very old and not in the know. He wasn't aware that MySpace had been uncool for about three years at this point.)

The next morning I woke up, thinking about everything that had happened (and not happened) the night before.

I knew what I needed to do, so I did it.

I created a MySpace, desperately hoping that Brian wouldn't realize I had done this just for him.

In hindsight, it had to be obvious. 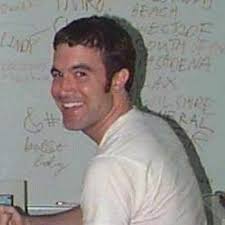