Our first interaction was a transaction.

I had just flipped the beer cart over a small foot bridge on the second hole of the golf course. I swear I'm not a bad driver; it's just that the wheel of the cart hit the edge of the bridge just right, and so it happened that the huge cart went flying into the air and came crashing down on its side, spilling beer and ice all over the ground.

It all happened so fast, really. I had abandoned the cart mid-flip, so what occurred in two seconds felt like ten minutes as I laid there and watched my cart sail into the air and land on its side, dangling off the bridge by just one wheel. Fortunately for me, not only did I crash the cart on my first day of work, I also had an audience of eight guys. They ran over to me, concerned for my safety and eager for beer.

(Still to this day, I'm bad about hitting curbs. Brian won't let me replace the hubcaps on my Honda with nicer, more classy wheels. Smart guy that Brian.)

Like a damsel in distress, I held back tears as I adjusted my sundress and quickly started gathering beer. The guys were so helpful and got my cart back onto the path. I cradled Coors Light and Heineken in my arms, as my hands reached out for the cash coming my way. They filled up their coolers with muddy ice and grassy cans, unfazed by what had just happened. I stuffed money into my pouch in a hurried attempt to leave.

(Mind you, this was the second hole and they were already re-stocking. How much beer were these guys planning to drink?)

As the nightmare was finally ending, I turned around and there stood Strawberry. We locked eyes for a brief second, and everything stood still. He offered me a few dollars in exchange for some Bud Light.

"Am I suppose to give you a tip?" he asked, genuinely.

I honestly can't remember if I answered.

One time when I was re-telling this story, Brian said we had met beforehand in the clubhouse, so now I have a fuzzy memory of my friend Jason introducing me to his friend "Strawberry" while we were all gathered in the pro-shop that morning. Is it really a memory or did my mind make this up? I suppose it doesn't matter either way.

A few days later, Jason's wife, Stephanie, came into the pro-shop and chatted with me as I stood behind the counter. (For some reason, my boss had suggested I try working inside at the pro-shop.)

"Do you remember Strawberry?" she asked. "Would it be OK if I gave him your number?"

Right then and there, it was confirmed; I hadn't just imagined it. There had been something between us that day. Right in the middle of my embarrassment and panic and humiliation, there had been a pause of curiosity.

Who is this Strawberry guy?
Why does this moment feel so defining?
And yes - you're supposed to tip. 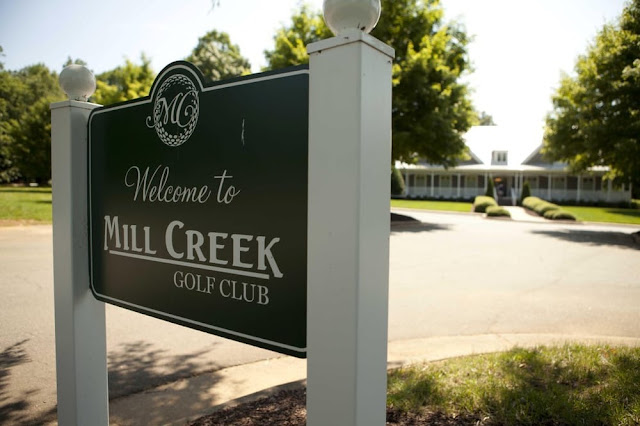 We had more fun than Caddyshack. Honestly, some of the best days of my life were spent here!

Hole 2. The cart path where I wrecked is on the left behind the trees. 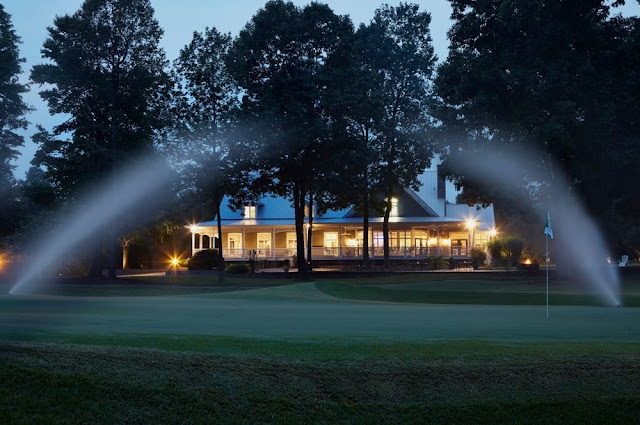 The clubhouse. Many evenings spent with friends on that porch.

Also, I'd like to insert that Brian's version of this story would likely be summed up as follows: "I bought some beer from Kelly that day she flipped her cart over. I don't remember sharing a 'moment.'"