I Swear I Smelled Almonds.

Two weeks ago, we were in Maryland talking around the dinner table and we told Brian's parents about our recent Copperhead encounters. Brian's mom announced "Copperheads smell like almonds." We all started laughing, thinking about the ridiculousness of almond-scented Copperheads.

So remember this post from back in November, when our neighbors casually mentioned that there were Copperheads in our yard?

I knew it was only a matter of time.

Brian killed two small Copperheads this past month and one baby Copperhead was run over by a car in our cul-de-sac the other week.

Well, news flash: North Carolina is #1 in the country for the number of Copperhead bites reported each year, with Wake County having the majority of reported bites. We live in the woods in Wake County, so I've come to terms with the fact that snakes are my new reality.

Even though we're spoiled with a gorgeous view, snakes come with the territory. 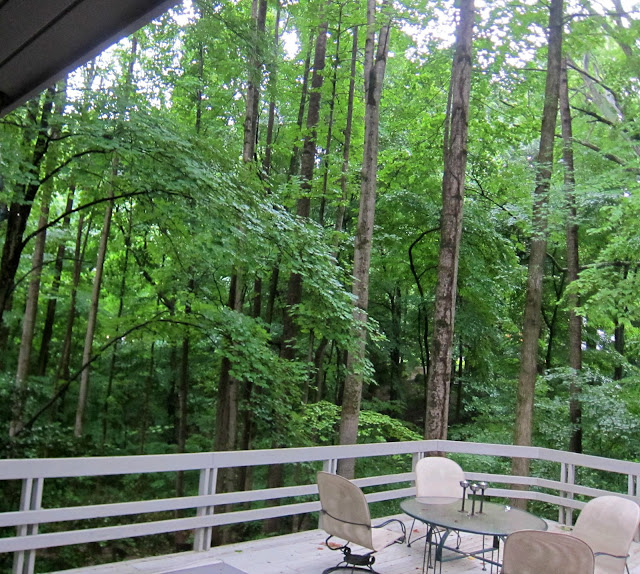 We can't have our cake and eat it too.

While I try to be semi-cautious of snakes, I'm still guilty of frequently walking around in the woods in shorts and flip-flops, especially at night when I'm taking Otis out for a walk.

This was the case tonight. I decided I'd take Otis out to pee after dinner. It was already getting dark. It was rainy and humid (prime Copperhead conditions, fyi), but I really wasn't thinking about snakes at all. Copperheads never crossed my mind as I was slipping on my flip-flops and heading out the front door.

But the moment I stepped out onto the front porch, I smelled it.

And I know the smell of almond extract like I know the back of my hand.

I've baked way too many cakes and I've drunk way too many Amaretto Sours in my lifetime, so trust me when I say - I know almond extract when I smell it.

My mind immediately went back to the Copperhead conversation at the dinner table in Maryland. OMG, is there a snake out here? (We live deep in the woods, so there aren't too many almond smelling explanations that come to mind).

I backed into the foyer, shut the door, and took Otis out to the backyard instead.

When I got back inside, I immediately turned to Google to see if this "Copperheads smell like almonds" nonsense was actually for real.

So now I'm left wondering, will I ever know the answer? And maybe there's some poor soul out there having the same dilemma, Googling about almond-smelling Copperheads, and maybe he/she will stumble upon my blog and leave a comment so that I know it's not just me. So I'll know that I'm not crazy. So I'll know, once and for all, if Copperheads really do smell like almonds. 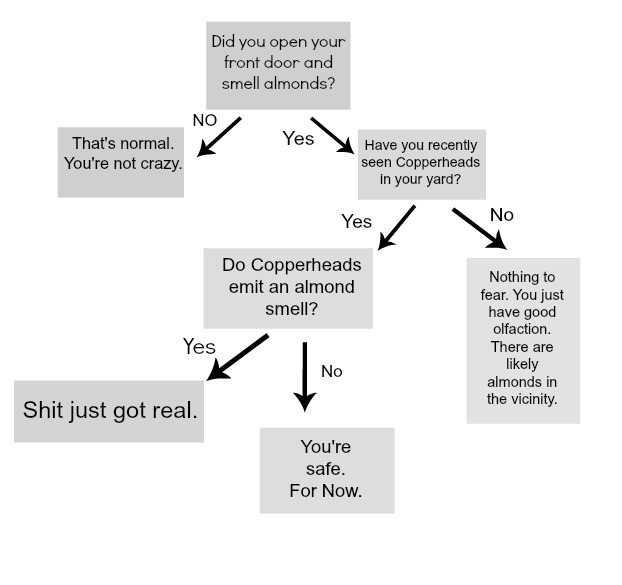