This is a piece I wrote to contribute to 919 Magazine. 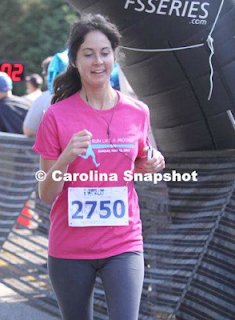 It was early March and I remember seeing the GMail pop-up chat box in the bottom right corner of my computer screen.

It was a message from my friend asking, “Do you wanna run a 5K with me?”

I thought about making up a reason why I wouldn’t be able to run the 5K, perhaps using my go-to “running-induced asthma” excuse, but a small part of me was up for the challenge. The “Run Like a Mother” 5K race in Wake Forest was nine weeks away, which would give us just enough time to complete the Couch-to-5K training program.  Most years of my life have been spent perfecting the Couch-to-Freezer routine for my nightly bowl of ice cream, so I figured it best that I try something new.  Plus I’d be running with my friends on the 919 Magazine team, and since 919 Magazine was one of the race sponsors, my registration fee would be waived. Free entry! Score!

My friend Ame and I decided we’d meet three times a week to run. We’re both lucky to live within close proximity to Lake Lynn, Shelley Lake, and the Greenway, so we agreed we’d meet at one of these places for our tri-weekly running date.

Well, Week One of the Couch-to-5K training was a breeze. With sixty-second intervals of walking and running, we were feeling like champions at the end of each session. Bring on the half marathon! By Week Two, I was begging to be back at Week One.  By Week Three, one of us was sick and the other was too busy, so Week Three became Week Four, and Week Four was entirely too difficult. “I can’t believe they expect us to run five minutes straight!”

But we pressed on.

The biggest challenge came at Week Six. My mom invited me to participate in the “Strike Out Sarcoma” 5K in Durham that weekend. I felt nowhere near ready, but I agreed I’d try. I surprised myself by running the entire race – albeit at a very slow pace. I finished in 35 minutes, 37 seconds. I was so proud!

Successfully running the Sarcoma 5K that weekend was the energy boost that I needed. I gave myself a few days to relax before I once again kicked it into high gear and finished the Couch-to-5K program.

On the morning of the “Run Like a Mother” 5K, I was feeling slightly nervous, but determined. I knew that many people would be walking, and walking the 5K seemed pretty tempting at 7:30 in the morning.

But I ran.
Slowly. Very slowly.

I finished at 37 minutes, 37 seconds. It took me a bit longer to run this 5K than the previous one, but I blame it on the “mother of a hill” that I sluggishly conquered at the end of mile 2.

I’m excited about my newly discovered passion and I plan to keep on truckin’. Today, I registered for the Susan G. Komen Race for the Cure in Raleigh on June 8th. Maybe by next year I’ll be running longer distances, or maybe I’ll pick up the pace and improve my time. The way I see it, running these 5K races has its perks. I burn calories while supporting a good cause. And now those nightly bowls of ice cream are completely justified.