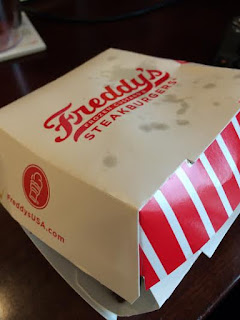 I made the Pioneer Woman's "Freddy's Burger" recipe on our stovetop griddle a few weeks ago.

Basically, you just press the hamburger patties very thin and melt American cheese between the two patties. It's also crucial to use cheap hamburger buns that are slightly toasted with lots of butter. Sounds healthy, right?

The concept is basically the same as Steak & Shake.

I had never heard of Freddy's before reading her blog, so I assumed it was an Oklahoma thing, or maybe just a chain that's specific to the Southwest.

I was so excited when I drove by a brand new Freddy's restaurant in Durham, NC!

I had to return some clothing I ordered from Old Navy today on my lunch break, so I was driving right past Freddy's. I decided to give it a try and see if it was really as good as the Pioneer Woman said it was.

I should have ordered their classic burger, but instead I went with the Patty Melt. 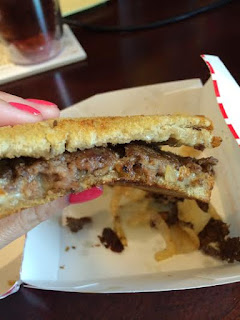 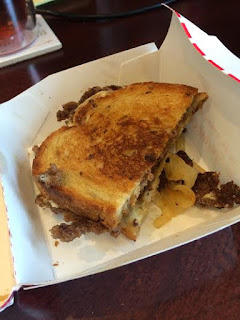 It was not as good as Steak & Shake.

Also, they lose a few points because I had to say "sweet tea" three times before they understood what I meant.

When I pulled away from the drive-thru kiosk after I ordered, I heard the employee ask someone "Do we have sweet tea?" LOL! He must not be from North Carolina. 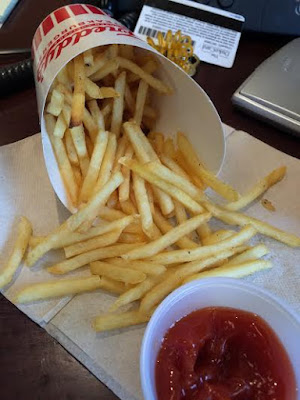 The french fries were OK. The employee asked if I wanted any of their special "fry sauce," which he told me it was a mixture of ketchup, mayo, and pickle juice. I tried the sauce, but didn't like it. As you can see from my picture, I used plain ol' ketchup.

So that's my Freddy's review.

I'd be willing to go there again, but it did not meet my expectations.