It was a Thursday afternoon, November 2006, and I was walking across the intramural field at Elon University on the way to my apartment. I had one more class that afternoon, Periclean Scholars, but I had decided earlier that I would skip. I had no good reason for wanting to skip class other than I just didn’t want to go, and that, for me, was reason enough.  As I got half way across the field, a voice inside my head said “turn around.” It wasn’t an audible voice, but the feeling was loud and clear, so I stopped dead in my tracks and I turned around.

Karen Godt, founder of Hope for Honduran Children (HFHC), was a guest speaker in our class that day. She talked about her work in Honduras and about the teenage boys who lived at Flor Azul because they had nowhere else to go. I could tell that Karen’s organization wasn’t just about giving handouts or preaching the Gospel; instead, they were focused on creating sustainable programs that would teach valuable skills and provide a supportive community for children who were abandoned, abused, and alone. As she flipped through the slideshow of pictures – barefoot children, mud houses, smiling faces – I felt saddened by what I considered important in life (nice stuff, being liked, looking pretty).

As Karen ended her presentation, she mentioned that a team from Elon would be working with HFHC in Honduras during Winter Term that year. I knew right away that I wanted to go, but I soon discovered the trip was intended for the senior class of Periclean Scholars. I was in the sophomore class. Plus, the trip was only two months away and it was too late to reserve a spot.

I had already committed to study abroad in Australia during Winter Term that year. My parents had already paid the non-refundable $5,000. My best friend and I were going together and we had been talking about our excitement for months. Now we were only a few weeks away. Despite all this, I couldn't stop thinking about Honduras.

I decided I would stop by the office of the professor who was leading the Honduras trip and ask him if there was any way I could tag along with his group of seniors. To my surprise, he said he had room for one more. The next morning, I went to the study abroad office to see if I could get a refund for the Australia trip. They informed me that there was one person on the wait list for Australia, so it wouldn’t be a problem for me to back out. A God wink – that’s how Karen described it to me later.

Everything seemed to fall into place after that. I went to Honduras that winter with a group of seniors I had never met. It was the trip of a lifetime. I developed ties to Honduras that would keep me returning to the country year after year – five trips in total. I worked with HFHC, Elon Volunteers, and Tara Moore to develop a week long service trip opportunity for Elon students.  Tara and I led our first group of students to Honduras in 2008. I spent another Winter Term there in 2009.

In Honduras, the emotions are raw. When you’re stripped of everything superficial, there’s no room for pride. The relationships are deep. I developed friendships with people who didn’t even speak the same language. I touched lives and lives touched me.

And that uneasy feeling when you return to America, to your life of excess? I know that feeling well.

On that very first trip, another Elon student, Liz, told me about a summer job she once had at a golf course near Elon. When I was back in the States a few weeks later, I drove to the same golf course and applied for a job. I was hired on the spot. That job ended up defining the next chapter of my life. I actually met my future husband on my first day of work.

It’s interesting to look back on your life and see how every decision has led you to where you are right now. For me, when I think about my life today, my mind always goes back to Honduras. I think of crossing that intramural field and where I would be had I not turned around. 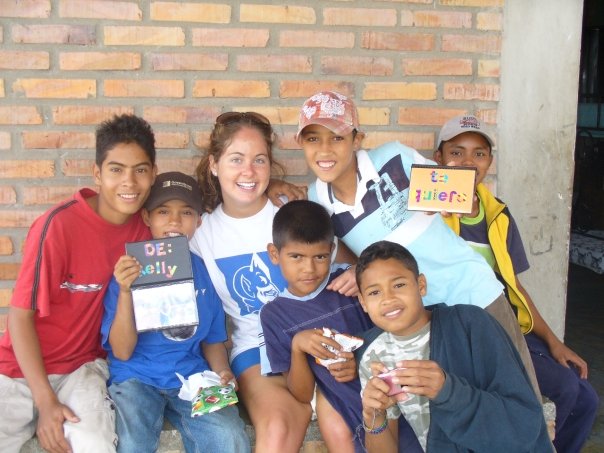