Brian and I (and Otis and Pippa) went to our first (and last) food truck rodeo on Sunday.

I didn't take any pictures at the event, but here's one I found on Google that pretty much sums it up: 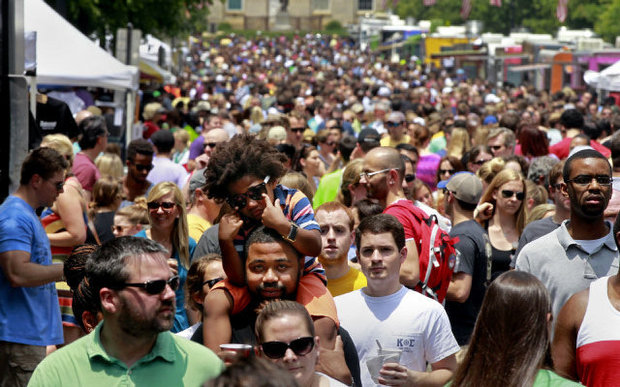 Warning signs that should have told me it was a bad idea from the very beginning:
- The rodeo was in Durham, a 30 minute drive from our house
- Brian was already hungry and slightly irritable before we left home

After meeting up with some friends, we drove to Durham's Central Park and found a parking spot about a half mile from the rodeo.

As we're walking to the food truck area, both dogs pooped on the sidewalk, thus forcing me to use the only two poop bags I brought along in the first 5 minutes. (There's so much social pressure these days to pick up dog poop. Lord help me had they needed to poop again that afternoon because I would have been bagless.)

Once we finally made it to Central Park and were in the throes of the rodeo (see picture above for reference), there was no turning back.

It was absolute hell.

Every man, woman, and child wanted to stop and meet the bulldogs, which was to be expected; however, it's always a bit overwhelming when 100+ strangers surround you and your dogs.

People were trying to take pictures with the dogs, as if our dogs were going to sit still for longer than one second. Some brilliant folks were leaning down to pet the dogs while holding food and drinks in their hands, and Otis literally started drinking the soda out of one man's cup.  A few people brought their children to meet the dogs and would ask - as the kids are already petting the dogs - "Are your dogs good with kids?" (Um, those waters have not been tested, but we'll find out soon enough.)

Brian waited 30 minutes in line for a sub-par burger, while I held the dogs over in the eating area, praying they wouldn't poop again and mingling with a hundred bulldog-loving strangers.

I'll stop here and interject that the dogs were well-behaved, minus the soda drinking, so I was very pleased. That's the only positive memory I have to share with you.

Once Brian finally got his burger, I had lost my appetite and didn't even want any food. The dogs and I just needed water....desperately.

Brian paid $4 for two bottles of water, which I selflessly gave to the dogs because they were dying of thirst. I started to feel faint at this point, so I handed off the dogs to Brian and went to go buy another bottle of water.

1. Not a single food truck had a line less than thirty people deep.
2. It was eighty-five degrees outside and the food truck generators were pumping out even more heat into the mob of people.
3. I was about five minutes away from passing out due to dehydration.

I made my way back out of the crowd, found Brian, and told him we had to go somewhere else for water. I was dying at this point! The dogs were also fading quickly in the heat.

It was at this time that I began having a panic attack because...OTIS ALMOST DIED.

Otis has an elongated palate blocking his throat, so he has difficulty breathing on a good day. The combination of excitement and overheating caused his throat to swell and he started making the characteristic "roaring" noise that is common when a bulldog is in distress and cannot breathe. It's terrifying.

Overheating in bulldogs is potentially fatal and I was amazed at how quickly it came on. Otis was fine one second and then unable to breathe the next.

Here's a video highlighting the dangers of heat stroke in a bulldog:


So yeah, the rodeo sucked.
Otis almost died.
And I never even got food from a food truck.

I can now mark "attend a food truck rodeo" off my list of 101 things to do and add it to my list of things I'll never do again.